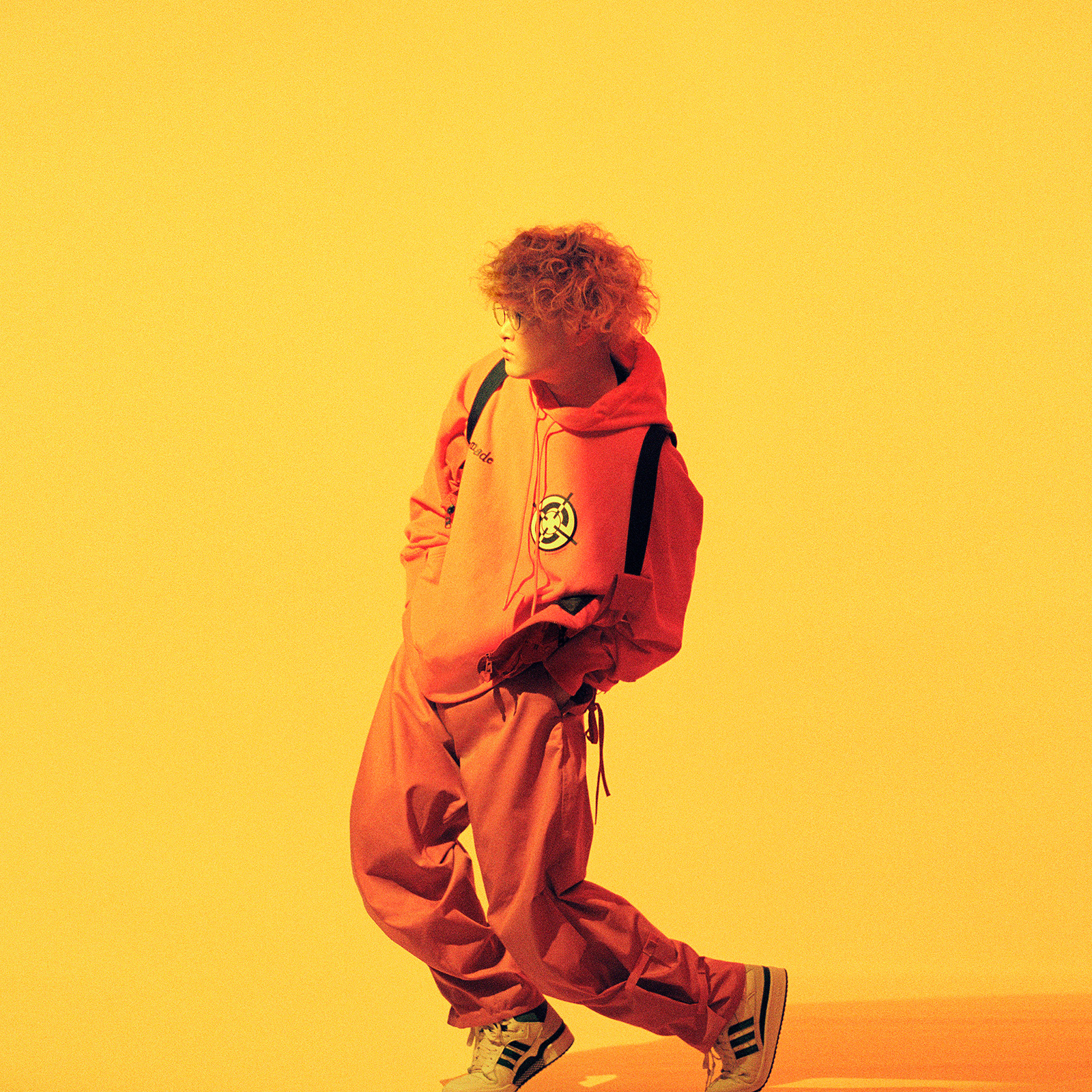 He is a multi-talented artist who writes, composes and arranges music all by himself and his talents expand to direction and self-production of designs and movies.

Since his first music post of on YouTube in spring 2019, his songs “Tokyo Flash” and “Fukakouryoku” have instantly become social media sensation.

With over 2.0 billion views on YouTube and subscriptions, they have become a symbolic figure in the era of Reiwa subscriptions. All of his live performances so far have been instant sell-outs. He has also been critically acclaimed by fellow artists and is actively involved in collaborations.

With an invitation from the international pop star LAUV, Vaundy participated in a global remix album and released “Modern Loneliness (Vaundy Remix)”.
His work has also been featured on the global culture site Nowness for his “Fukakouryoku (Global Dance Video)” produced by his global production team and his performances and creative activities crosses the borders.

His songs having been a long time presence in the charts, they have been chosen as tie-up songs in commercials and dramas.

With an unmistakably unique and addictive voice that catches the audience’s ear and a broad sense of music that is not confined to any genre that gives a sense of unparalleled talent, Vaundy is rapidly expanding his fandom especially among teenagers.

-“Fuka-Kouryoku” reaches 1 million views on YouTube only after a month from release. -“Tokyo Flash” ranks Top 3 for 2 consecutive weeks on Spotify’s Japan Viral 50.

-Selected as Spotify’s “Early Noise 2020” artist as upcoming star of the year.

Invited to perform in Spotify’s newcomer showcase at Ebisu LIQUIDROOM. (Event cancelled due to COVID-19)

With an invitation from the international pop star LAUV to participated in a global remix album and released “Modern Loneliness (Vaundy Remix)”.

The first album “Strobo” was released on 27th May.
The album hit the Apple Music & iTunes Rock Chart and Tower Records Weekly Chart.

The songs “Tokyo Flash” and “Tomoshibi” have been selected for power play on over 40 radio stations throughout Japan.

“Fukakouryoku (Global Dance Video)” was picked up by the global culture site Nowness and distributed worldwide. The video is highly received in Japan and abroad.

“Fukakouryoku” was featured in the Spotify Premium commercial “Spotify Town”. After the release of the commercial, it reached No.1 on the cable charts and shazam charts, and rose rapidly on the subscription charts.

The first one man live “Dainingenzenya” which had been postponed since April was broadcasted live with no audience on 30 August. The performance was critically acclaimed.

The 2nd one man live “strobo” was performed at Zepp Haneda. In addition to the live performance with audience, simultaneous live streaming from the live venue was broadcasted.

The first LP “strobo+” was released on November 3. It includes “Tokyo Flash – TEMPLIME Remix” for the first time. (Remix is available exclusively on Spotify for subscription).

On December, 27 Vaundy released “Sekai no Himitsu”, his first new song in six months, which reached number 2 on the LINEMUSIC charts.

On December 22, “Vaundy’s All Night Nippon 0 (ZERO)” was broadcast live on a nationwide network with Nippon Broadcasting System as the key station.

He has been ranked No.1 on Nippon Television’s “Buzz Rhythm 02” “Kore ga Buzzruzo! 2021” No.1, LINE MUSIC Song Chart and Album Chart No.1, Billboard JAPAN Newcomer Chart No.1, shazam Chart No.1.

On February 24, “Yuukai Sink”, the first distribution single of 2021, was released.
The music video, which makes full use of live-action and CG, features actress and model Sara Minami.

On March 23, Vaundy appeared on NHK’s “Sibuya no Oto: Graduation Song Special”.He performed their new song “Shiwaawase” live with orchestra arrangement for the first time.
The new song suddenly became a trending topic on Twitter right after the broadcast.

Wrote and produced “Chikyugi with Vaundy” for Aimer’s 6th original full album “Walpurgis”.
The song, sung by Vaundy himself, reached the top of the charts every day. The song has also been chosen as the commercial song for DS Automobiles “DS 3 CROSSBACK INES DE LA FRESSANGE”, a French luxury car brand.

“Boku wa kyo mo” and “Kaiju no hana uta” have been chosen for Maruha Nichiro’s TV commercials, endorsing the long success of the songs released in the past.

On April 11, “Shiwaawase” was released.
The song was broadcasted as a TV commercial song for the 2021 academic year of Shuto Medical School, Osaka Medical College and Nagoya Medical College.
The music video, directed by Yuichi Kodama, has attracted a lot of attention, appearing in the fast-rising rankings on YouTube.

May 15, one man live “KATARIBE”, Tokyo performance at Zepp Tokyo.

On June 8, Vaundy appeared live on J-WAVE “SONAR MUSIC”, and “benefits” was released on 12 June on which same day, he performed an one man live “KATARIBE” in Tokyo at Zepp Haneda, and in Osaka at Zepp Namba on 26th June.

The song “Sekai no Himitsu” was chosen as the theme song for the WOWOW original drama “Short Shorts Theater Kokoro no Fufufu”.

9/12 One man live tour “HINODE”, a 5-city, 7-show tour, kicked off at Zepp Nagoya.
9/23 Fukuoka show at Zepp Fukuoka
9/22 ”Tokimeki” released for streaming.
This song was written as a commercial song for TOYOTA “Corolla Cross”.
“napori” was selected for the Bourbon “Alfort” TV commercial starring Issei Takahashi.
Also written a new song ‘Iseijin’ (偉生人) as an inspired song for the NHK Taiga drama ‘Seiten wo Tsuke’.

10/2 His first national tour, one-man live tour “HINODE” kicked off at Sendai GIGS. DE”
10/18&19 Performed at Zepp Tokyo and released “Nakijizou” (泣き地蔵) for streaming on the 19th and its music video with the latest virtual production technology has also been released.
10/31 Performing live, including a live natalie event “Vaundy x 04 Limited Sazabys” at Hibiya Park Grand Concert Hall.
Appointed as a DJ on FM802’s MUSIC FREAKS, where he navigated the show every other week for a year.

11/17 Released “Odoriko” (踊り子) for streaming. The music video, starring Nana Komatsu, quickly reaching over 10 million views in about a month after its release.
At the MTV VMAJ 2021 music awards, which recognize the best music videos of the year, the music video for “Wrinkles (directed by Yuichi Kodama)” won the “Best Visual Effects” award. His visual works have received a lot of attention and recognition as well as his music.

12/1 Selected as the LINE MUSIC Trend Award.
Several of his songs made it into the rankings and were “popular hits throughout the year” with people of all ages.
12/17 “Omokage (produced by Vaundy)” (おもかげ) ,Vaundy wrote and produced was released.
On the same day, album Strobo was released on Apple Music Dolby Atomos.
Strobo was ranked third on Spotify as the “most played album in Japan”, following YOASOBI and BTS. One year and seven months after its release, the album is recording strong sales.